Every now and then, someone in one of my drawing or painting classes, usually during one of their first lessons, trying something that they have never done before for the first time, will say “I can’t do this!”. 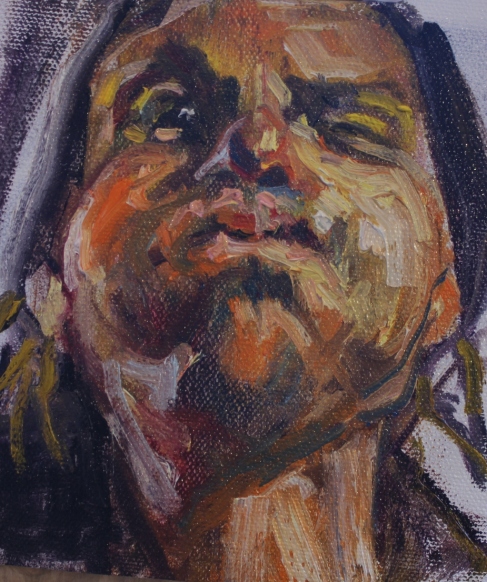 Here, to make a point about practicing stuff, are two little self portrait studies, along with the part that almost nobody else ever gets to see: all of the OTHER self portrait studies that I did along the way that are destined for the “pile of doom”; the hundreds of paintings that I’ve done that will never see the light of day. 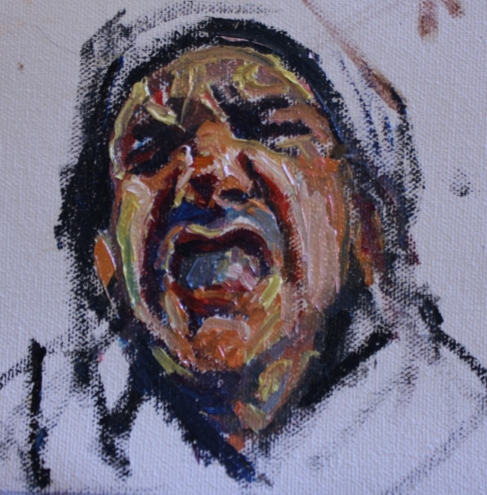 I have never really stopped to count, but I would say that on average, I get asked between three and five times a year to donate art to be auctioned off for various causes. I do believe very strongly in helping people who are less fortunate than I am. As an artist, it can be nice to be able to donate my work directly, because I usually don’t have any considerable sum of liquid cash to give to anyone. Personally, I think that donating at least 10% to charity is a good standard.

I have been casually forming my own set of standards for donating, or not donating work, and so here, in the true spirit of the internet, I will share them with whoever cares.

This is a politically touchy subject. In fact, it’s no mistake that I’m writing this in the “off season” (most requests for donations come during the holiday season); I don’t want to offend anyone personally. It’s not uncommon for the person making the request to be another artist who is helping to put an event together. Furthermore, there’s an unspoken pressure: when all of one’s friends and colleagues are donating to something, nobody wants to be the person that said no.

I try my best to not do anything that devalues my work. I owe this not only to myself, but to the people that have supported me by paying the going rate for it. If the work I am being asked for is going to be auctioned off, then the minimum bid is the gallery price. Period. Frequently, organizations will ask artists to lower prices to increase sales, and I do not do this. I’m donating to help a cause, not give some other donor a sweet deal on my work. Furthermore, lowering the price not only devalues my work, but devalues my contribution to whatever cause I’m donating it to. Imagine giving $500 to a charity and then were told the next day that they threw $200 of it away. I would prefer that my work is sold in an art-specific context, because that is the market in which it is most valuable. I’ve seen my work ignored on a table, neatly framed by a Holly Hobby cross-stitch and a $50 pet store gift certificate (the hot item of the night, with bidding starting at just $10!). So much for “great exposure”.

The other frequent request is that artists create something specifically for an event or theme. I’ve been asked to paint on weird objects that I assume some company got a tax write off for donating, make art around an event’s catch phrase, been given crazy deadlines, or asked to create something that fits within a price range that is lower than my work sells for. Once I was asked to create a 4×8′ painting on a heavy piece of cheap plywood in just ten days. Just for reference, most of my larger (4×5′ or so) paintings represent about month’s work, and I am VERY fussy about the surfaces that I paint on. Of course, there was a suggestion that I could just “crank out something simple. It doesn’t have to be perfect!” Bullshit. If it’s going to have my name on it, in any case, then it is going to at least be the best that I can do. “Good enough” has no place in art.

I have never once written off the cost of donated work, and as far as I know, it isn’t possible to do so. I’m definitely not the one to go to for tax advice, but my understanding is that to write something off, you must be able to show that you paid the amount of the write off for whatever it is. In other words, the people who BUY my art at auction get a tax deduction, but I can only write off the cost of materials. There may be some sort of accounting jiggery-pokery around this, but I’m not aware of it.

So when WILL I donate? First of all, I want to know that my donation is doing some good. I want your organization to have a mission that I like, and I want to know that the money is going to be spent well. Also, as a friend who who has experience in development for non-profits pointed out to me, artists should be treated as major donors. I might not be writing a check for $50,000, but considering that I can produce about 25 pieces a year that I think are worth putting on a wall, asking me to give you one of them is a major donation my end. I don’t expect to be taken out to fancy dinners or have a conference room named after me, just that the integrity of my work and it’s value be respected.

In keeping with the theme of exposure, the painting pictured above is of my back yard under a full moon after a recent snow.

I’m a little tired of idealized snow in paintings. Snow, like Christmas, is great fun for kids, but the novelty wears thin after a few hours for me. I want to paint snow that turns into a muddy mess, that makes us late for work, and snow that makes simple things like walking into a chore that must be properly prepared for. 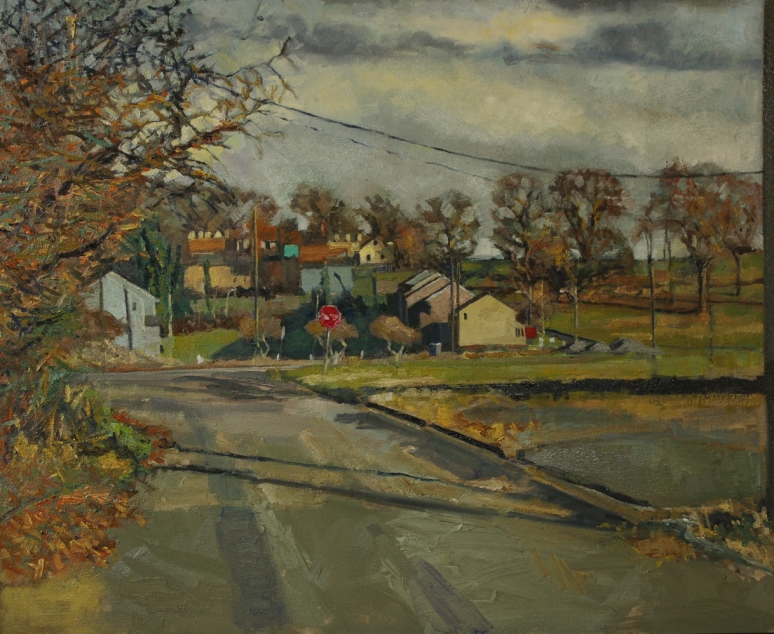 I have been thinking about time and place lately, and how they leave their marks on everything. You can’t run from it. If an artist does, and tries to make something that looks like it is from another time and place, that artist runs the risk of seeming pretentious. (Did I just put Steampunk in a category with Thomas Kinkaide? Why, yes, I think I did!) What I would rather do is make something that is friendly with being from the time and place in which it was actually made, but at the same time contain elements that are somehow compelling, even when taken a little out of context, and as time moves on.

I really haven’t updated in a while. I painted this cicada skins this spring when areas around Richmond were over-run with Brood II magicicadas, a once every 13 year occurrence. At the time I was thinking that I’d dedicate my summer to paintings of small things, like this, but wound up back outside looking at spaces again.

Even though I’m more interested in the challenges of composing a painting of a space right now, I haven’t completely abandoned figurative work. Here’s a little self portrait I did the other night, with some low-quality images taken with my phone as I worked, for anyone curious about the mess that I start off with. 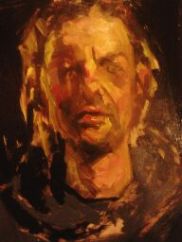